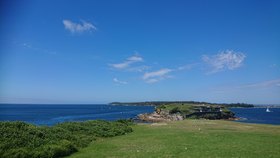 Alas, even though the winds were light, the moderate (~1m) NE swell, it wrapped around the headland and into Gordon's Bay just enough that we decided a nicer dive would be had at Bare Island, a 20 min drive south.

It was already busy when we got there at 7:50am, but we were able to park not too far from the walk down. By the time we were kitted up, there was a steady stream of divers heading in. Steve & I headed along the NW side of the Island while Al buzzed around on his scooter. The water went from 'nice and refreshing' when getting in, to straight 'refreshing' at 5m and them 'almost chilly' for those in wetsuits by deeper (~14m) parts of the dive.

We made it a good way around the island and the sponges were looking fabulous. We came across one good-sized wobbie and there were more rays than you could shake a fin at in the shallows.

Post dive, we had a good coffee from Driftwood on the Bay before giving up our parking spots to the hoards wanting to bake themsel...