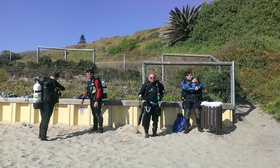 A lovely Saturday morning weather wise and off to Bare Island for a splash. Everyone arrived in good time with a small amount of faffing prior to the mention of something different. How about Little Bay as a dive site today as the swell appears ok? There are a few steps was the next comment! Right lets do it we agreed, and the plan was to follow the driver that then lost his way! No names mentioned is intentional. Anyway after eventually arriving in the car park Ben and I reviewed the steps to the beach, which made me sweat just thinking about the hike down and up.

The site is pretty with reef and some life with a max depth of about 13-14m and viz about 6-9m. The dive is mainly along the right hand side of the bay going around to the south. The kelp can get very disorientating as it flows back and forward, but there are holes under rocks to explore so I will take a torch next time.

There are showers o... 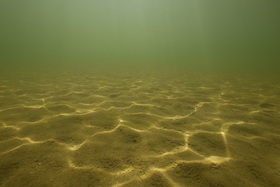 It is not often you get to crack out the BSAC Altitude Dive tables, but when the opportunity to sneak a dive in Lake Jindabyne (915m, over 3000 ft) Rick and I jumped at the chance. Lake Jindabyne is part of the Snow Mountains Hydroelectric Scheme. The dam was completed in 1967 and the old town of ~250 people was relocated to its current location beside the lake. A rummage around the University of Sydney library managed to pull out a map showing both the lake and the old town. While the lake in the map doesn't exactly match Google Maps, it gave the impression that if we went in from East Jindabyne and headed west we would hopefully hit something...well that was the plan.

There is a four wheel drive track off Rainbow Drive just before Alpensee Way, which leads down to a small beach. The lake water looked pretty clear and inviting. We kitted up and did a surface swim out ~200m heading in the direction of the bowling club on the o...

After the excitement of the AGM had died down and a fresh round of beer procured it was time for the 2013 SSAC Awards:

To the person who went on the most club dive trips during 2013.

*Gold: Ben ‘I’ve just got a rebreather and will dive a muddy puddle’ Crossett

To the person who organised the most club ‘trips’ (i.e. sent an e-mail to the club list about a planned dive/social outing excluding the who’s going to the pub on a Wednesday night e-mails) in 2013.

*Silver: Ben ‘I want the website to look busy’ Crossett

*Gold: Jonathan ‘a day without seeing Baz’s beach is a day wasted’ Pearson

To the person who took the best photo or video and posted it on the club website for a 2013 trip.

The Cathedral and Apartments

The forecast was a bit of a mixed bag, a high of 29'C, a strong north easterly wind building during the day, MetEye was predicting 2-2.5m seas, plus the risk of thunder storms just to add to the excitement. However, the call came through from Alex that the dive was still on so we all met up at 33°44'20.8"S 151°18'29.4"E, aka the boat ramp at Fisherman's Beach, just next to the Long Reef Golf Club. Once a substantial donation had been made to the local council for the privilege of using the rather convenient parking and toilets, we set about kitting up.

Shortly before 12 noon the Frog Dive boat rocked up, disgorged the previous round of divers and we waded in to the mild surf to clamber aboard. It was a short, but lumpy ride out to the first site: [Cathedral t... 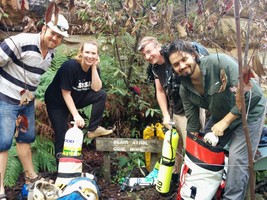 As there aren’t many diveable caves in NSW, you have to make do with what you’ve got. With this in mind a group of the local cavers teamed up with a few of the cave diving qualified members of the SSAC to explore Blair Athol Mine.

Located in the Blue Mountains, the mine entrance is about 500m from the nearest road access. Once in the mine, a wide, but not so tall (hard hats essential!) tunnel heads downhill for about 200m until you reach the water line.

Even with a couple of Sherpa’s helping it took two trips to relay the gear to the water’s edge. Once underwater the mine shaft continues for a similar distance (15-20 min swim) and down to a depth of 55m. The water is ~14’C and gin clear, in the beginning. The visibility quickly drops to zero, so as can be seen in Rick's video, you don’t have long to admire the coal wagons at the end of the tunnel. An interesting dive, but one best suited to the experienced (and enthusiastic) drysuit wearing... 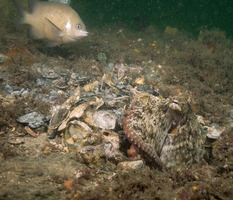 Maybe it was the lure of home baked snacks, or maybe it's just a classic Sydney shore dive, but eight club members rocked up at Bare Island for a Saturday morning dive. The hordes of other divers, was a good sign, but the substantial swell breaking on the east side of the island was less attractive. With minimal phaffing (despite excessive gear in some departments) everyone buddied up, kitted up and was off. Underwater, the recent rain and the swell had dropped the vis to 2-3 m, but no one got separated and everyone make it back without any navigational hiccups. The was the usual plenty of sponges, nudibranch and fish, as well as the odd cuttlefish and octopus. After the dive, Liz produced an amazing selection of snacks (Thanks you!), the perfect way to round off a morning's diving. Thank you also to Alex for organising.

Something Hot, Something Cold at King Street Brewhouse

Something Hot, Something Cold was the latest instalment in the episodic SSAC 'Film nights' series during which we heard about diving from two environments which are poles apart: Antarctica and Chuuk Lagoon. With the happy hour house brewed beers going down well and everyone well fed, Ross started the evening with tales and photos from his recent voyage around Antarctica and was followed by a short film from Sam showing us his highlights from the (relatively) recent club trip to Chuuk Lagoon.

It had been 5 years since the first joint B(risbane)SAC-SSAC trip to Stradbrook Island, so when Andy, the BrisSAC DO, suggested we come up for the Queen's Birthday weekend Rick, Fe and I jumped at the chance.

When we were leaving cold, wet and windy Sydney the forecast for the weekend was not much better. However, we arrived to a warm evening and great Queensland hospitality - picked up at the airport followed by British fish 'n chips supper (with curry sauce!), what a great start. BrisSAC go over to Straddie regularly so they are a well oiled machine, everyone meets at the ferry terminal, car pools to minimise the ever increasing ferry prices, communal food and drinks (a full size keg of Maddog Pale Ale!) were packed.

Launching the boat on Saturday it was hard to believe the forecast of a large swell and strong winds. Out at the dive site it was a little easier, with the wind making for a chilly surface interval for wet suit divers and enough swe...

“Great people, great boat, great dive sites and a great weekend” is how I heard one member of the SSAC group aboard Ocean Trek sum up the trip. The group consisted of members with as little as 20 dives under their belt, like myself, to members who’ve done so many dives they may as well have gills. It was a great trip for the inexperienced divers to gain extra confidence and develop further interest in being underwater.

From the time we were greeted at Huskisson wharf on Friday night by Mick’s beaming smile we were incredibly well looked after by the entire crew aboard Ocean Trek who were efficient, professional and friendly. They had extensive knowledge and experience on all of the dive sites around Jervis Bay so they were able to choose the optimum dive sites depending on the weather conditions. Friday night was a good chance for everyone to settle into the boat, chill out and have a few drinks.

Early Saturday morning the boat gingerly made its way over to Bowen Island, which...